A Taste of Easter With a Twist at Raval 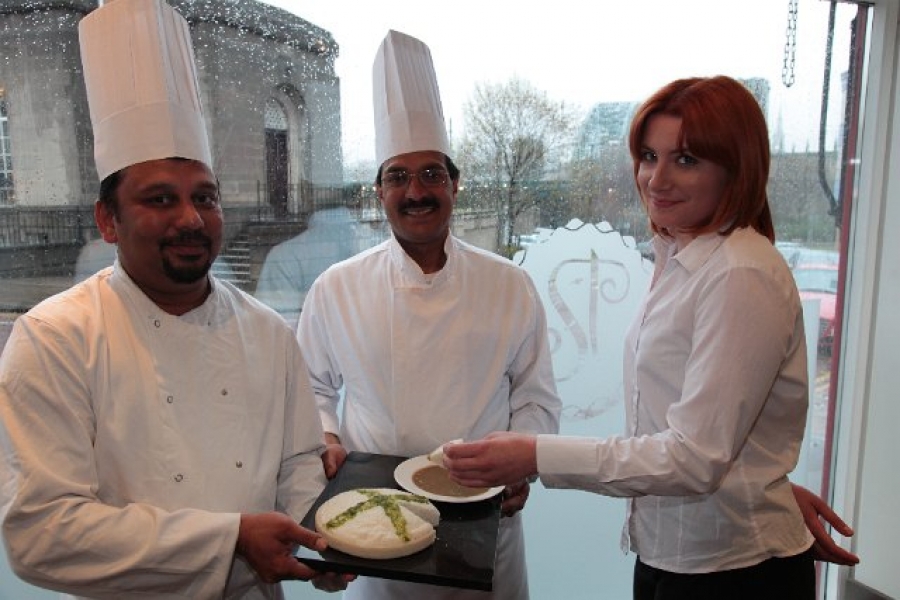 North diners will be given a taste of Easter in a far-off land this week when top chefs invite them to sample India’s equivalent of our traditional hot cross bun.

The unique bread, known as Pesaha Appam, is among several speciality dishes being served up at one of the region’s leading restaurants to mark the forthcoming holiday weekend.

Chefs at Raval Luxury Indian Restaurant in Gateshead are keen to demonstrate the importance of Easter amongst India’s Christian population.

From today – Maunday Thursday – until Easter Monday, they will be adding a seasonal twist to the restaurant’s regular menu.

Pesaha Appam, an unleavened bread especially popular in Kerala where there is a large Christian community, is made from ingredients including rice powder and split lentils.

And while it has little in common with Britain’s beloved hot cross bun, it does have a visible cross baked into it.

It is served with Pesaha Paalu, a unique-tasting sauce made from coconut milk and jaggery, a by-product of sugar cane.

Other Easter specialities will include Kozhi Pidi, a coconut-flavoured chicken soup, and Beef Ularthu, a rich, mildly-spiced main course.

Raval chef Joseph Abraham explained: “There are many Christians and Roman Catholics in India and in Kerala in particular as that’s where the majority prophets and saints come from, so eating Pesaha Appam is a tradition many observe.

“Every year on Maunday Thursday people carrying wooden crosses join processions in Indian towns and villages where they gather to sing songs.

“Breaking the bread and eating it with the sauce is an important part of the tradition as this symbolises Christ’s body and blood.”

Raval manager Avi Malik said: “Easter is an important time of year for Christians the world over, but many are unaware of how it is celebrated beyond these shores.

“We thought it would interesting to see what northerners make of India’s version of the famous hot cross bun .We’re confident they will be pleasantly surprised.”

Raval hit the news last month when it was revealed England and Newcastle United legend Alan Shearer enjoyed a private cookery lesson there with the restaurant’s top chefs.

Shearer joined a group of friends, including former team mate Steve Harper, to learn the tricks of the trade, and rustled up a gourmet meal for wife Lainya and pals.

Other celebrities to dine at Raval include Cliff Richard and Hank Marvin, girl group The Saturdays,  rockers The Stranglers and politicians Oliver Letwin and Vince Cable.