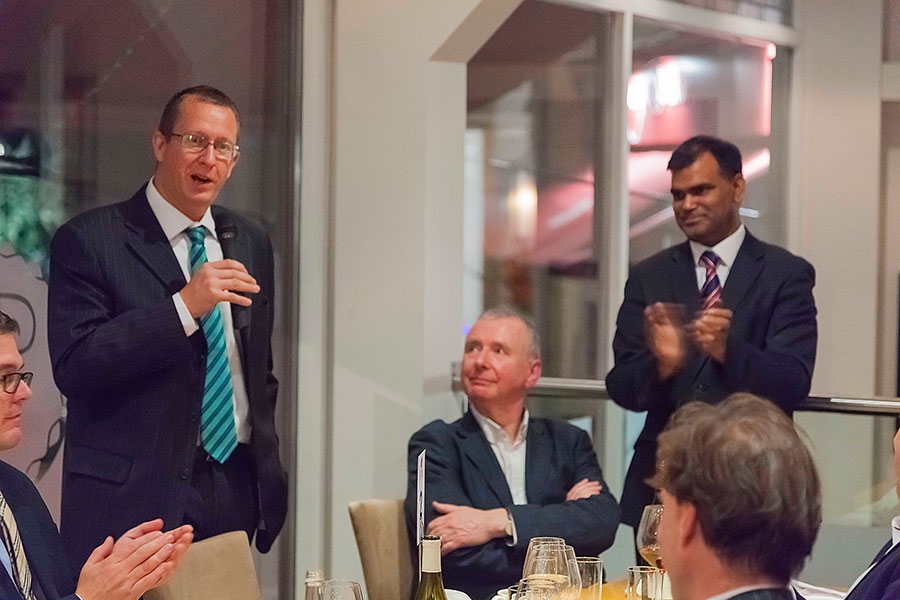 POLITICIANS and business leaders celebrated one of the region’s most iconic landmarks at Raval Luxury Indian Restaurant.

The event – to mark the 85th anniversary of the Tyne Bridge – was sponsored by Newcastle-based engineering giants British Engines Limited.

Among the guest were senior employees of the company, including group product and engineering director Richard Dodd and his father Ron, together with former Minister for the North, Newcastle East MP Nick Brown, and BBC Newcastle presenter Jonathan Miles.

And to mark the occasion in true Geordie style, Raval chefs created a unique curry using the ‘one and only’ Newcastle Brown Ale.

Raval Manager Avi Malik said: “As far as we are aware, no one has ever created a curry using Newcastle Brown Ale.

“But we decided it was the perfect ingredient for a dish to celebrate another Tyneside legend – the Tyne Bridge.

The beer-infused curry was served with Northumbrian lamb and the regionally-themed menu also included a dessert containing Lindisfarne Mead.

BEL’s Richard Dodd, whose company was founded on Tyneside in 1922, said: “We were delighted to be part of this very special event.

“We have an affinity with the Tyne Bridge as it encapsulates the long heritage of engineering in this region.”

Guests were also able to meet some of the region’s finest artists, including Jim Edwards and Ray Campbell, who are among several currently exhibiting their work at the restaurant.

All of the paintings on display take their inspiration from North East landmarks, including the Tyne Bridge.

Dennis Anderson, of Bridekirk Fine Art, which represents the artists, said: “We are grateful to Raval for backing local artists and for giving them such a wonderful space in which to exhibit their work.”

Mr Malik added: “We have had nothing but positive feedback following our Tyne Bridge celebration and already we have received enquiries from other companies interested in hosting events at the restaurant.” Avi Malik interviewed on the day of the event by BBC Radio Newcastle presenter Jonathan Miles.