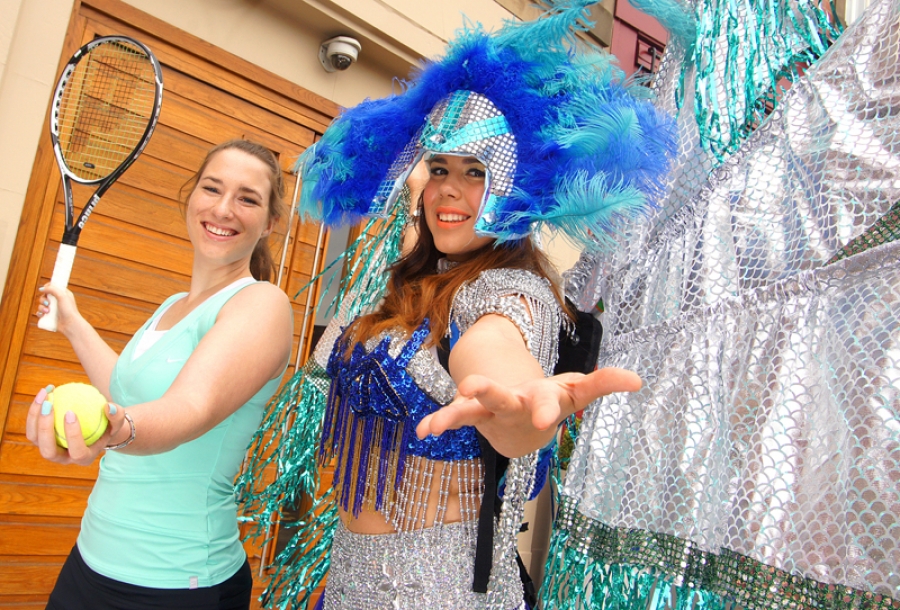 TEENAGE tennis ace Grace Dixon was given a glimpse of what the future may hold for her yesterday when she came face-to-face with a Brazilian carnival queen.

Rising star Grace has her sights set on competing at the next Olympic Games in the Rio de Janeiro in 2016.

The 16-year-old, of Whickham, Tyneside, is being supported by the charity SportsAid in her bid break into the professional tennis circuit.

And the young hopeful – who has been ranked as high as 13th in Europe – is also being helped by Raval.

Our diners raised £500 for Grace after teaming up with SportsAid for a campaign that saw the luxury restaurant’s customers tucking in to meals laced with genuine gold and silver during the Olympic fortnight.

Rather than simply presenting a cheque to Grace, the restaurant brought a touch of glamour to the occasion with the help of South Shields-based community theatre organisation The Creative Seed . . .by enlisting the services of 17-year-old carnival queen Kye Harris.

Grace, who has just received her A-level results, said: “All of my friends have been out celebrating, but I have to stick to a strict training regime.

“So although I got A-stars, As and Bs, I’ve had to miss out on partying. But it makes the sacrifice all worthwhile when I get this sort of support.

“Without funding, I couldn’t even dream of being part of Team GB at the next Olympics.”

Kye’s mum and Creative Seed co-owner Sandy Harris, a former wardrobe supervisor for the West End musical Starlight Express, said: “We were thrilled come to Raval to support Grace. We wish her every success for the future.”

“We wanted to do play our part by supporting a rising star in the north, and they don’t come more deserving than Grace.

“She is incredibly dedicated and we will be watching her career with interest.”