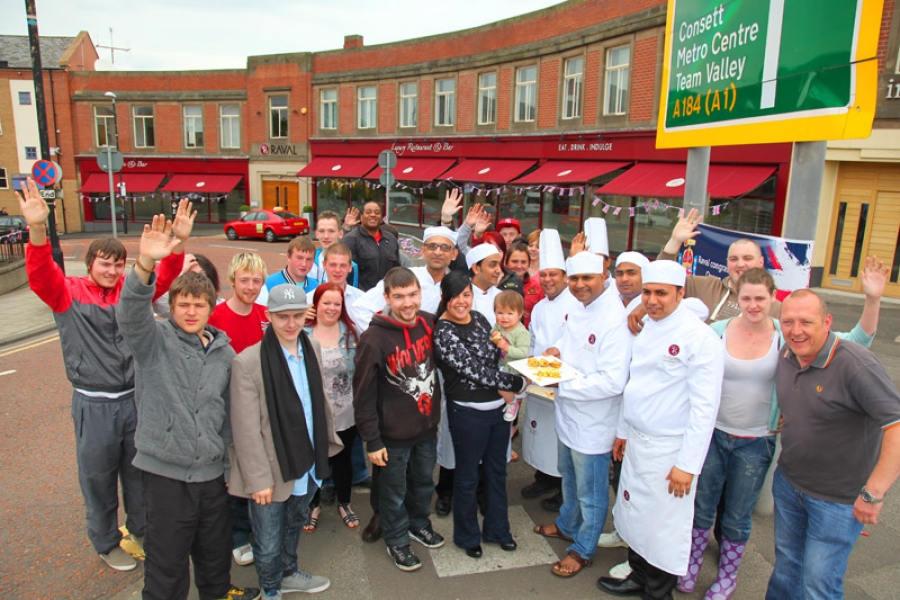 Young people who have overcome problems including drug and alcohol abuse, homelessness and  domestic violence were guests of honour at a lavish party to celebrate the Queen’s Diamond Jubilee.

Around 25 vulnerable youths were treated to a slap-up meal when Raval hosted the special event on Tuesday, June 5th,  as part of its drive for social inclusion.

It meant the young adults, all aged between 16 and 21, were the first to sample the latest dish to be created by the restaurant’s chefs . . . a new take on Coronation Chicken, the recipe invented to mark the Queen’s ascension to the throne exactly 60 years ago.

The special guests  are currently living in accommodation provided by Your Homes Newcastle (YHN), an Arms Length Management Organisation working to prevent homelessness among young people by giving them the advice and support they need to live independently.

Norman Slater, Operations Manager for Young People’s Services at  YHN, said:  “We support vulnerable and often very chaotic young people in Newcastle by helping them to tackle their problems, find accommodation and provide the advice and support needed to live independently.

“We also give them other support such as finding training, employment and encouraging them to become part of the community. “

He added: “They were delighted to  attend the event at Raval . . . it’s fantastic to see local businesses supporting young people and making them feel like an important part of the community.”

Raval Manager Avi Malik said: “For many, the Jubilee is joyous occasion that creates unity and a sense of national pride.  But for those who sometimes feel excluded from mainstream society,  big events such as this can leave them even more isolated.

“That’s why Raval was determined to make a difference. Under the umbrella of the Raval Foundation, a non-profit organisation managing charitable projects, we decided to open our doors to some of the region’s  most vulnerable young people.  It was our way of rewarding them for the progress they have made.”

Raval chefs have ‘re-invented’ Coronation Chicken, giving one of the nation’s favourite dishes a spicy, up-to-date twist, and the YHN guests were the first to try it.

Unlike the original dish, Raval’s new version is served hot.  And, instead of mayonnaise and full-fat cream it contains coconut milk and a unique blend of 12 spices, topped with almonds and pistachio nuts.

But the Raval Foundation’s mission to involve minority groups in the Jubilee celebrations does not end there. The restaurant will also be treating elderly Newcastle residents.

Its chefs will bring their expertise to the Greater Walker Community Trust, based at Monkchester Community Centre, on Friday, June 8, when they will be serving the new Coronation Chicken dish to around 100 guests.

“We’re especially looking forward to sampling the restaurant’s new take on Coronation Chicken . . . some of our regulars are surprisingly adventurous when it comes to food.

“I’m sure it will be a memorable and fun-filled day, which is the sort of environment we always aim to create as research shows it benefits people’s wellbeing.”

Qualified carer Jen set up the Community Trust 15 years ago after becoming disillusioned with the lack of services for the area’s ageing population.

The charity provides care and support for frail and disabled vulnerable adults,  and works to minimise the effects of social isolation.