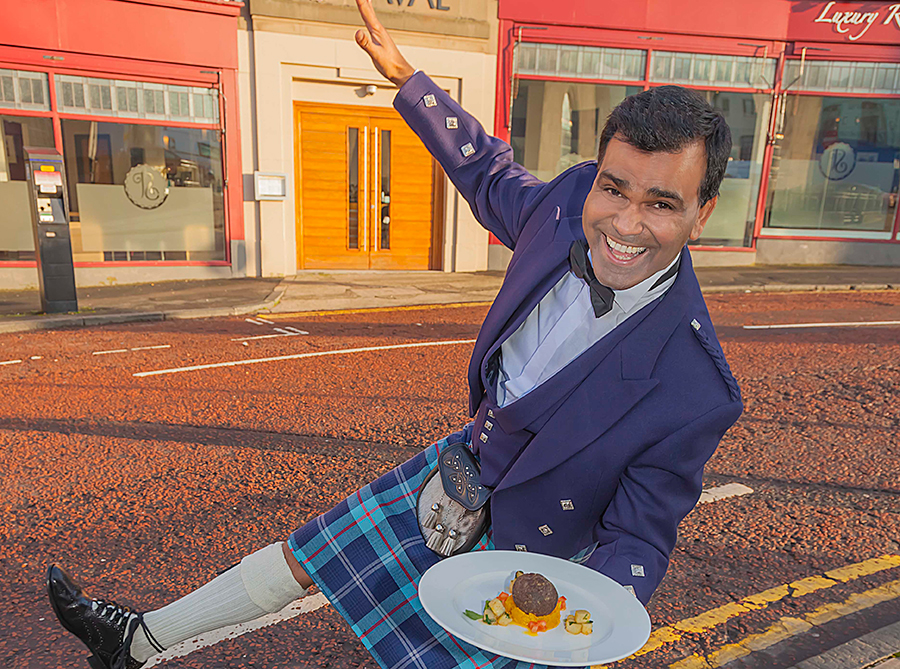 OCH aye the phew! The region’s top Indian restaurant raval is putting the burns into Burns Night with a hot and spicy haggis!

The tartan treat gives an Asian twist to the traditional supper served to celebrate the birthday of the Scottish bard, Robbie Burns. Haggis, neeps and tatties have been swapped for curried haggis, spiced neeps and Bombay tatties at award winning Raval Indian Restaurant, in Newcastle.

The eatery, recently named Best Indian Restaurant in the North East, will serve the unique dish this Saturday to commemorate the famous poet and author of Auld Lang Syne. Manager  Mr Raval– the region’s newly crowned Curry King following his restaurant’s success at the British Curry Awards in November – said: “The Geordies have a very close affinity to the Scots and regard Robbie Burns as one of their own. “That’s why we decided we couldn’t let Burns Night pass by without doing something out of the ordinary to mark the occasion.” Mr Raval– who has since been dubbed Mr Raval by staff – called on Raval’s celebrated chefs to come up with their own unique take on a Burns supper.

The resulting dish will be added to the menu for one night only on Saturday, January 25. The restaurant boss, who turned heads outside his Tyne Bridge premises when he donned a kilt to launch the dish, added: “Our chefs are always looking for new ways to present Indian food, but coming up with an Asian version of a Burns supper presented them with quite a challenge. “The result is a spicy treat that has quite a kick but won’t blow your head off. It’s a little out of the ordinary, but I think it’s a winner.”

Former England rugby coach Sir Clive Woodward presented Raval with its prestigious award after it scooped the Best Indian Restaurant in the North East title at the British Curry Awards in London, dubbed the Curry Oscars. The event was hosted by Who Wants to be a Millionaire star Chris Tarrant, with Prime Minister David Cameron among the guests.