Raval has been voted the best Indian restaurant Newcastle, As well as receiving regional and national critical acclaim, we  have  been recommended for a Michelin Star by celebrity London chefs, judging their Raval experience as among the best modern Indian cuisine in Britain. 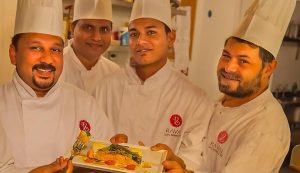 Below are some of the  reviews we have received from customers, industry peers as well as local and national publications including The Journal, The Guardian and Restaurant Magazine.

“I have now eaten in the raval indian restaurant twice in the last 3 weeks, once for a full meal and the other for the Early Evening  of the new Tapas menu last night!! cannot fault the food, it is first class and each time i have been i have felt very valued and looked after! i cannot wait to go again.”

“If you think you’ve tasted biriani before, then youve likely never tasted anything like this before. This is the real thing, as a proper biriani should be. Nothing absurdly hot, just bursting with delicious flavours. I can’t recommend the tapas experience highly enough.”

“Best curry I think I’ve ever had”

“The fish curry was wonderful, the seabass was perfectly cooked and the sauce was rich and tasty. I like food a little hotter and so the excellent waiters were more than happy to accommodate my request to have my meal more spicy than advertised on the menu.”

“Raval is different from your run of the mill Indian restaurants, the menu is not extensive, but is different and so worth trying. I’ve been twice now and had a different dish each time, on both occasions something I’ve not seen on other Indian menus. You really to have to try this one.”

“One of the best eating experience I have had in a very long time. Food was immense ,staff were very attentive and knowlegable about each dish that was served.” 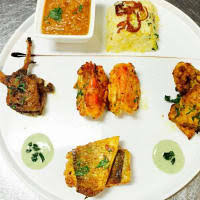 “Raval is a modern Indian that punches way above its weight.”

“Raval is clearly pushing the boundaries of Indian cuisine into new and sophisticated areas with diverse and novel approaches to classical recipes… this is very good food at any price.”

“Raval brings sophistication, class and nutrition to our favourite weekend comfort food. It’s the real deal. They stick to what they know with classic Indian dishes and spices combined with locally sourced meat and vegetables. The tapas dishes were bold but not overpowering. It’s a version of authentic Indian street food with flair.”

“This top quality establishment is the new word in Indian cuisine.”

“Quality is the keynote of Raval’s dishes… the restaurant looks the part and delivers the real deal.”

“Raval’s jewel in its crown is its food; deliciously, superbly cooked.”

“The people on the table beside us had stopped for food before the theatre, which suggests it’s a good destination to grab a bite to eat before a night out in the Toon. Its proximity to the Tyne Bridge and the Sage means it is handy for such occasions.”

“Raval is a contemporary Indian restaurant with a lovely atmosphere and very friendly staff. As for the food itself, the freshness and flavours take it way beyond what you would expect at most Indian restaurants. There is real technique and skill involved in the way Raval’s chefs combine complex spices to create dishes that are authentic but not overpowering.”  – Paul Gaylor, Executive Chef at Knightsbridge London’s 5 Star Lanesborough Hotel

“My first meal at Raval certainly exceeded all expectations. It’s the sort of food I’ve been fighting to see served in the UK’s Indian restaurants for the past 20 years. Normally, I steer clear of recommending restaurants but I have no hesitation whatsoever in recommending Raval.  It’s a shining example of the Asian restaurant sector.” – Cyrus Todiwala O.B.E, Executive Chef at London’s Cafe Spice

“Raval is genuinely stylish – the sort of place you’re happy to be seen in. It couldn’t be further removed from a run-of-the-mill curry house. It uses spices to create real Indian food that’s packed with flavour and beautifully presented. Eating there is a rewarding experience, made even more enjoyable by the attentive staff.” – Paul Bates, Executive Chef at London’s 5 Star Intercontinental Hotel

“I have always taken people to Raval, including other chefs, and you have to have confidence in a restaurant to do that. The food is fragrant and correctly balanced . . . there’s real passion on every plate.” – Douglas Jordan, Chef & Chairman N.E.C.T.A.